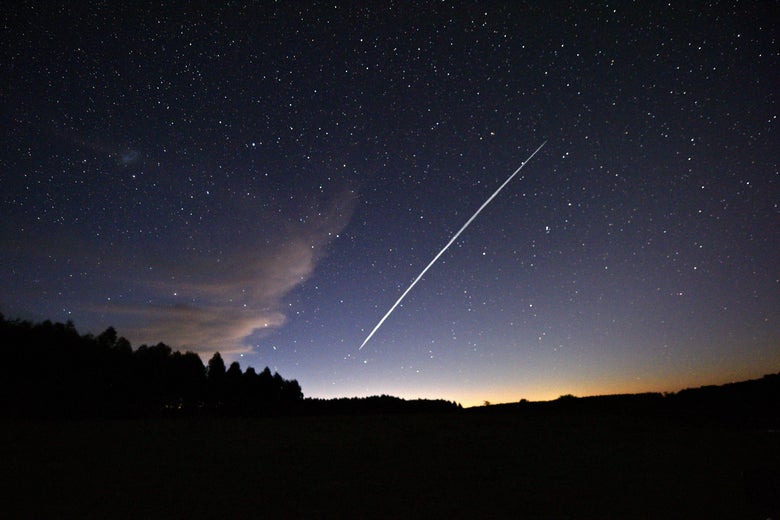 The huge infrastructure package that recently passed the Senate allocates billions of dollars for expanding affordable internet access nationwide, raising the question of who and where should get that money. No recipients have been named yet, but low earth orbit satellite networks like Starlink might be one option federal agencies, state, and local governments consider. These networks have recently gotten attention for their potential to connect people in rural areas too hard to reach or capital-intensive for terrestrial service. (They’re also getting attention from angry astronomers who don’t want their views of the night sky ruined.) The technology is promising, enough that one of these networks, SpaceX’s Starlink, won $885.5 million in federal funding in 2020 from the Federal Communications Commission’s Rural Digital Opportunity Fund.

Now, Starlink is petitioning to win even more federal money, asking to be recognized as an affordable service provider that could be reimbursed for providing service to low-income households in the country. But problems with its service suggest the federal government should step back from further bankrolling the company for the sake of expanding access until Starlink demonstrates that it can actually fulfill the promises it makes about the service.

Since 2018, SpaceX has been launching small satellites into space to create a satellite internet service it says is faster than what standard satellite companies currently offer. (Incumbent satellite providers like Viasat and HughesNet currently offer median download speeds 10 times slower and upload speeds 20 times slower than median speeds available through an at-home, fixed broadband connection.) This summer the company reported that there are about 90,000 people using Starlink as beta testers, and that half a million people total have either placed an order or put down a deposit to try the network. Service currently costs $99 a month with a $499 upfront cost for equipment, and deposits for preorder are fully refundable. The goal, Elon Musk recently shared, is to improve service, increases users, and generate around $30 billion in revenue, at which point SpaceX will sell or go public with Starlink and use the money to finance SpaceX’s Starship system, Musk’s plan to transport people from Earth to the Moon and Mars.

Looking at these numbers, it’s easy to see Starlink as an ambitious project that could bring much-needed, high speed service to rural areas. Third-party speed tests show that the median download speed of Starlink service can range from 40.36 to 93.09 Mbps, two to four times higher than speeds advertised by incumbent satellite providers HughesNet and Viasat. Beta testers on the Starlink subreddit are enthusiastic about service, sharing their experiences installing equipment and the speeds they’ve experienced, and helping one another troubleshoot. But there’s so much that’s unknown about the network and its service.

To start, the service remains in its infancy, with little data on its performance or financial solvency. While beta testers and Starlink fans have shared information about their personal experiences with the service, the company itself has yet to release any data about service locations, speeds, or its reliability. But we do know that beta-testers have experienced regular outages anywhere from eight minutes to 90 minutes that remain unexplained. There’s also the question of whether the company can remain in business. SpaceX’s president shared this summer that the company currently loses money on consumer side equipment, and while noting that costs of producing satellite equipment are projected to go down, she didn’t specify whether cheaper production costs would also mean savings for the end user.

Information about Starlink’s previous winning bids for federal money also raises questions whether the company just says things to get money. In its winning bid for Rural Digital Opportunity Fund money, Starlink also argued that the company was “uniquely positioned” to serve “hardest-to-reach rural Americans.” However, public interest group Free Press revealed that at least $11 million of the $885.5 million Starlink received in December 2020 is designated to serve random urban locations like traffic islands, giant storage tanks in urban industrial parks, and other places in densely populated cities with multiple other options for high-speed internet. This is despite Starlink’s CEO’s own admission that the network is ill-suited for people who live in areas with high-speed cable or fiber service. Furthermore, there’s been no information from Starlink yet that the network is specifically available in the rural areas it purported it would serve with Rural Digital Opportunity Fund funds.

Still, the company is now arguing that it should receive federal funding as an affordable internet service provider with Lifeline, a federal program to help low-income households afford telecommunications service. Again, Starlink’s beta service costs $99 a month, plus an upfront cost of $499 for the user terminal/satellite dish, mounting tripod, and router. These service costs are actually comparable to those charged by incumbent satellite providers who advertised much slower service in rural areas, and in some ways an improvement, as Starlink does not currently cap or penalize data usage. But the current Lifeline support is $9.25 a month, less than one- tenth of the monthly cost of Starlink. Even with the subsidy, it’s unlikely that people living at or below 135 percent of the poverty line will be able to pay the upfront cost of a satellite dish, let alone afford $89 a month for internet service.

There’s therefore little evidence that Starlink qualifies for federal funding, or that it even needs federal support to continue expanding its network. In fact, the company initially spurned government subsidies, arguing that technology and private sector investments would better bring internet service to unserved and underserved populations than federal funding. Rather than continuing to bankroll Starlink, the federal government should focus on supporting locally-based and/or municipal solutions to ensure more equitable access to the internet, and support and reform federal programs that do make internet service affordable for those who need support.

One immediate (and cost-free) action that the government can take is to make it legal for communities to build their own networks in places where private companies refuse to build out broadband infrastructure. These networks serve more than 900 communities today, bringing fast-speed, affordable internet that expands social and economic opportunities to underserved communities, ensuring that schoolchildren remain connected to online school and other virtual learning opportunities, saving hundreds of dollars for residents in service costs and fees. At least 20 states restrict or prohibit public communications initiatives and public-private partnerships like community or municipally owned and operated broadband networks. Monopolistic private providers like Comcast have also spent millions to keep these barriers in place. These companies are especially concerned with competition from public networks than with new private companies like Starlink since public networks, less concerned with turning a profit for investors as they are in expanding access, can’t be as easily priced out. Big Telecom most recently was successful in lobbying to drop language supporting municipal broadband networks that had initially been discussed for the recent $65 billion infrastructure bill. Passing a bill like the Community Broadband Act of 2021 would allow communities and local governments to decide for themselves whether operating their own broadband network would be the best way to expand internet access and catalyze local economic development.

The government should also continue making internet service affordable through aggressive support of existing federal programs like Lifeline and the Emergency Broadband Benefit. High prices affect everyone, not just those in rural areas, but also low-income, Black, Brown, and other people of color in cities, as well as the Indigenous and those living on tribal lands. The average cost of connectivity in the United States today, according to recent research from my organization, New America’s Open Technology Institute, is $68.38 a month (New America is a partner with Slate and Arizona State University in Future Tense.) Beyond keeping the subsidy amount high enough to significantly reduce internet bills for low-income households, there are a number of ways the federal government and in particular the FCC can reform and strengthen aspects of both Lifeline and EBB programs to ensure everyone can afford service.

While improvements in internet speed and user costs from next-generation satellite technology could help reduce dependency on fixed fiber broadband, it will likely not replace broadband completely. Instead of focusing on an unproven silver bullet solution to the problem of the digital divide like Starlink, policymakers should work to improve broadband competition and make getting online affordable for all. It’d be a shame to throw money into ferrying people into space while people struggle to even get online here on Earth.

Next post Best Shares To Get This Week? 3 Shopper Tech Shares To Check out